A highly variable species. Currently 2 subspecies are recognised in Victoria. A third, slender-leaved variant from the upper Snowy River area in eastern Victoria was noted by Walsh (1996). These plants were previously associated with S. kali var. leptophylla Benth. However, it is questionable whether these plants sit outside the range of variation of S. tragus subsp. tragus.

This species is now largely thought to be native in Australia. Recently it has been proposed that Australian plants are distinct from those overseas, and that we adopt the name S. australis R.Br. (Chinnock 2010). Such a change would have implications for any subspecific or currently unrecognised taxa. Salsola tragus remains in use here as new combinations have yet to be made. Further changes in nomenclature are likely pending taxonomic review. 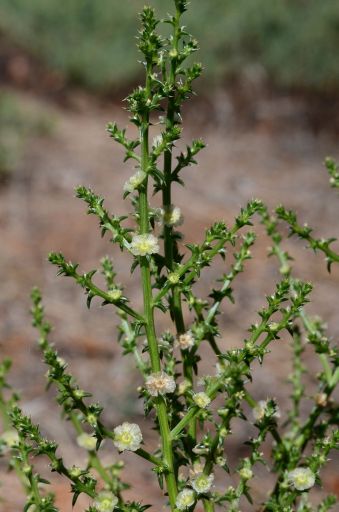