Oxalis corniculata is a very variable species. Many infraspecific taxa of O. corniculata have been described over its cosmopolitan range, but their taxonomic status is uncertain. A form known mainly from urban gardens in Melbourne (Heathmont, Malvern East, South Yarra) is included here with reservation as a 'form' of O. corniculata, but may in fact be another species. It has nearly glabrous stems which do not root at nodes or do so only proximally, stems with scattered antrorsely appressed hairs, and the seed ridges with prominent white lines and/or blotches. This entity is possibly also annual or mostly annual. Other than a form of O. exilis (see notes for that species), that often occurs in lawns and disturbed sites, no other members of the O. corniculata group in Australia have been observed with distinct white lines and/or bloches on the seed ridges. Occasional specimens of O. corniculata have faint greyish lines (faint greyish lines or blotches sometimes present in O. chnoodes), but the stem indumentum is moderately to densely hairy and spreading. Several members of the O. corniculata complex in North America, including O. albicans, O. californica, O. macrantha and O. texana, have white lines and/or blotches on the seed ridges, but the Victorian plants cannot be matched with any of these species. Another distinctive entity known from two collections from urban gardens in Melbourne (Forest Hill, and South Yarra) is characterised by having a very dense stem indumentum of spreading and retrorse hairs, and inconspicuous stipules with very narrow free margins. It's possible that this entity might represent O. pilosa, a species from North America, but is here also treated with reservation as part of O. corniculata, pending resolution of its identity.

Eiten, G. (1963). Taxonomy and regional variation of Oxalis section Corniculatae. I. Introduction, keys, and synopsis of the species, The American Midland Naturalist 69(2): 257-309. 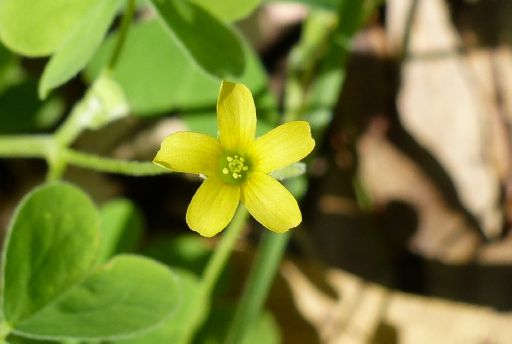