Annual or perennial herbs, shrubs or vines (rarely trees). Leaves mostly alternate, rarely opposite or whorled, simple and usually entire; stipules usually well-developed and fused into a hyaline sheath (ochrea) around the stem. Inflorescence a contracted or elongate raceme or panicle, each branch and flower usually subtended by a small ochrea-like sheath (ochreola). Flowers bisexual or unisexual (then plants usually dioecious); pedicel usually articulate some distance below perianth; perianth segments 2–6, shortly fused at base, green or coloured and petaloid, in 1 or 2 whorls, sometimes apparently spiralled; stamens 2–9 (rarely more); ovary superior, 2–4(usually 3)-carpellate, unilocular; styles usually 3 (as many as carpels), free or fused near base. Fruit an achene or small nut, often trigonous, falling enclosed by the persistent perianth, usually with part of pedicel remaining attached.

About 1000 species in c. 30 genera, chiefly in temperate regions of the Northern Hemisphere; c. 63 species (27 introduced) in 11 genera (5 native) in Australia.

Acetosa and Acetosella are often included as subgenera within a broader definition of Rumex and similarly Persicaria and Fallopia (as sections) within Polygonum, but all are retained here as distinct genera. 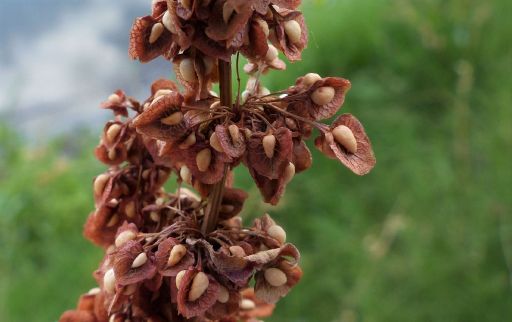