CVU, DunT, EGL, EGU, GipP, Glep, HFE, HNF, HSF, MonT, SnM, Strz, VAlp, VVP, WaP. Also NSW. Naturalized in New Zealand. Recorded as a casual wool alien in United Kingdom. Occurs chiefly on low-lying flats and near watercourses at low altitudes in the east (largely replaced at higher elevations by C. iynx), with disjunct westerly occurrences in the Eltham area and near Portland (note that some distribution records may be based on misdetermined material of C. iynx).

Very close to C. iynx, differing especially in the terminal spike usually having female flowers above male flowers, in the generally more slender spikes (3–5 mm diam. at maturity versus 5–8 mm diam. in C. iynx), and the usually narrower and shorter glumes (both in absolute terms and relative to utricle length: extending no higher than the base of the beak of the utricle). The leaf-sheaths are generally paler yellow-brown and have less fibrous material remaining around them than in C. iynx. Leaves are often rather stiffer and broadly M-shaped in cross-section in C. longebrachiata (cf. V-shaped in C. iynx). Although most specimens may be readily assigned to one of the two species, some specimens appear to combine characters of both. It is possible that both species would be more realistically contained within a broader concept of C. longebrachiata (the first-described of the two). 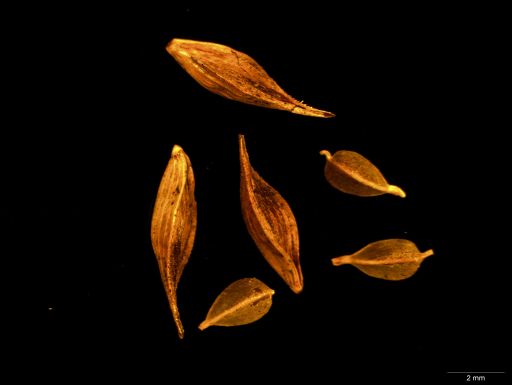