Extremely variable, with a number of forms that may warrant formal recognition. Bentham erected 3 varieties: var. molle from Bass Strait islands, possibly concordant with the softly hairy, small-leaved plants of Wilsons Promontory and far eastern coastal heaths; var. hirsutissimum, which is uniformly villous or long-hispid and may be endemic in the northern Grampians (e.g. Mt Zero); var. grande described from the Dandenong Range, with leaves 25 mm long or more. Of these, the latter appears least distinct, but precise circumscription of any of Bentham's varieties is complicated by a range of intermediate and/or other equally distinct entities. A delicate small-leaved form from the Brisbane Range, with leaves only 3–5 mm long, often glabrous and apically notched appears noteworthy. Plants having uniformly grey-velutinous foliage have been collected from rocky sites in the Snowy River gorge, Wilsons Promontory and near Point Hicks. Apparent hybrids with S. vexilliferum occur e.g. near Portland, Wallaby Rocks in the Grampians, and perhaps near Anglesea. Spyridium x ramosissimum from the Grampians, is a hybrid between S. daltonii and S. parvifolium, occurring where both parents occur in the northern Grampians. 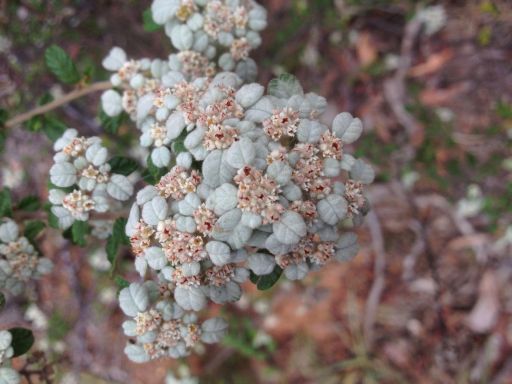