About 350 species, widespread in Central and South America, South Africa and Australia; 52 species in Australia (12 naturalized), with representatives in all mainland States.

Several species of Senna in Australia, especially S. artemisioides, have been shown to have complex breeding systems, including apomixis and polyembryony (but unusually, these do not always result in a cohort of identical seedlings), polyploidy and hybridisation (e.g. Symon 1956, Randell 1970). It has been asserted that S. artemisioides is itself of hybrid origin with S. cardiosperma (F.Muell.) Randell being one of the parents. As that species does not occur in eastern States of Australia, this assertion is open to question and S. artemisioides is tentatively treated here as a 'good' species, albeit with a confusing infraspecific array. Elsewhere (e.g. Randell & Barlow 1988) some taxa, including subspecies of S. artemisioides are recognised as unranked 'form taxa' in an attempt to avoid assumptions regarding the reproductive origin of these entities.

The taxa included here in Senna were formerly placed in Cassia, a genus now distinguished by its versatile anthers, terminal inflorescences, the presence of floral bracteoles, woody indehiscent pods and the absence of leaf glands. 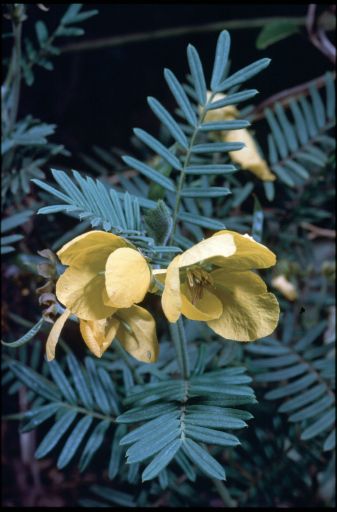