A variable species that includes several forms over its world range. A distinctive form with broad culms, and with mostly at least 3 spikelets is apparently restricted to coastal sands. This entity appears to match the syntype of Scirpus arenarius Benth. (1878) nom.illeg., which is a replaced synonym of Scirpus psammophilus S.T.Blake. Muasya & Simpson (2002) treated S. psammophilus as a taxonomic synonym of Isolepis cernua var. setiformis (Benth.) Muasya, which however has a 2-fid style (3-fid in S. arenarius). Bentham described S. arenarius as having 2-fid styles, and it is so figured by Clarke (III. Cyper. tab. xlvii. figs. 1-2), however, Blake (1940) points out that the syntypes (from Wilson's Promontory) have 3-fid styles, though otherwise agreeing with Clarke's figure. Another entity with predominantly 2-fid styles may be referrable to Isolepis setiformis (S.T.Blake) K.L.Wilson. Blake explicitly described Scirpus setiformis as a new species, and did not base it on Bentham's variety. In Muasya & Simpson (2002), I. setiformis is distinguished from I. cernua by the number of style branches, with 2-fid styles in I. setiformis 2-fid and  3-fid styles in I. cernua. However, it is currently unclear if this character is reliable, as plants with a mixture of 2-fid and 3-fid styles have been collected.

Close to Isolepis platycarpa (see note for that species). 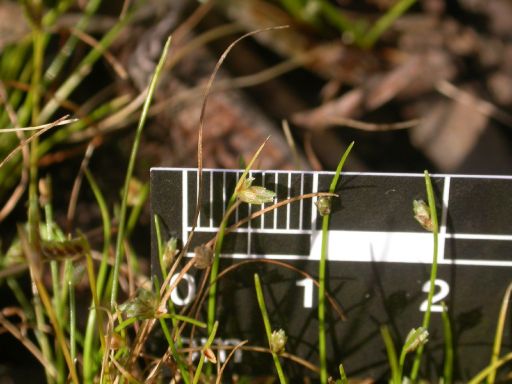