Annual (most Centrolepidoideae) or perennial (usually) herbs with wiry-jointed 'stems', mostly dioecious, occasionally monoecious, rarely bisexual. Rhizomes usually present and tufted or creeping. Branches (aerial 'stems') terete to flattened, branched or unbranched, erect or flexuose, solid or hollow. Leaves with blade usually reduced to dry sheathing bracts; lamina usually reduced to narrow apex or not developed, or sometimes well-developed and linear (in Centrolepidoideae). Inflorescence with partial inflorescences solitary, terminal or axillary, flowers arranged in 1–many-flowered spikelets with subtending floral bracts, or not arranged in definite spikelets; male and female inflorescence similar or dissimilar. Perianth regular, 3–6 and glume-like, or dry and membranous and in 2 whorls. Male flowers with 1 (in Centrolepidoideae) or (2–)3 stamens, opposite the inner perianth parts; filaments free and threadlike, rarely short; anthers 1- or sometimes 2-locular, dorsifixed. Female flowers with 2 or 3 staminodes or staminodes absent; ovary superior, 1–3-locular; styles 1–3; ovule solitary in each loculus. Fruit dry, 2- or 3-angled, loculicidal, or 1-locular and opening along one side, or a small nut.

About 64 genera and c. 545 species, mostly confined to Australia and South Africa, with 176 species in Australia. This family is superficially similar to the Cyperaceae. A useful vegetative feature which distinguishes the Restionaceae from the Cyperaceae, is that the former has unfused 'open' leaf-sheaths whereas the latter has fused leaf-sheaths.

Briggs, B. G., Marchant, A. D., & Perkins, A. J. (2014). Phylogeny of the restiid clade (Poales) and implications for the classification of Anarthriaceae, Centrolepidaceae and Australian Restionaceae, Taxon 63: 24-46.

Key to the genera of Restionaceae 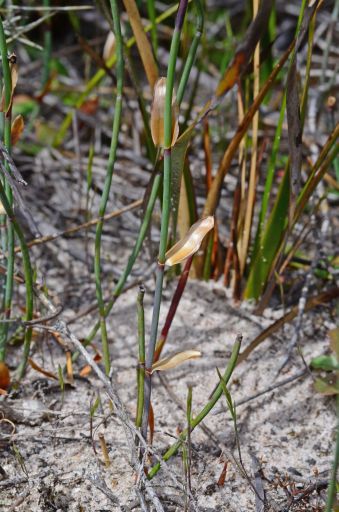