Annual or perennial, tufted, creeping, rhizomatous or stoloniferous herbs. Leaves often lobed or ternately or pinnately divided. Inflorescence a few-flowered cymose panicle or flowers solitary and terminal; sepals 3–5; petals 3–many in 1–several whorls, yellow or white, usually glossy; nectary present on upper surface of each petal, usually near the base and appearing as a narrow bracket to deep pocket; stamens usually numerous (few in some annual species); carpels free, usually numerous, 1-ovulate. Fruit an achene, several-many in a globular or ovoid head, each achene usually beaked by the persistent style.

The spectacular Anemone Buttercup, R. anemoneus F. Muell., was claimed to have occurred on Mt Hotham in the latter part of the nineteenth century (Stirling 1887), but then diminishing due to cattle grazing. It seems that either Stirling's (the only) record of the species was incorrect or that the species finally succumbed to grazing pressure as it has not been recorded in Victoria since. Ranunculus anemoneus is the largest-flowered and showiest species of the genus in Australia. Its white flowers are commonly 5 cm or more wide with up to c. 30 petals, and usually appear during or soon after snow-melt. It is now locally common in the Mt Kosciusko area, after being seriously depleted there prior to the cessation of stock grazing in 1958.

Descriptions of shapes and lengths of achenes (unless stated otherwise) do not include the beak.

Briggs, B.G. (1960). Ranunculus lappaceus and allied species of the Australian mainland, Proceedings of the Linnean Society of New South Wales 84: 295-324.

Melville, R. (1955). Contributions to the Flora of Australia: II. Some Ranunculi of Tasmania and south eastern Australia, Kew Bulletin 10: 193-220.

Key to the species of Ranunculus 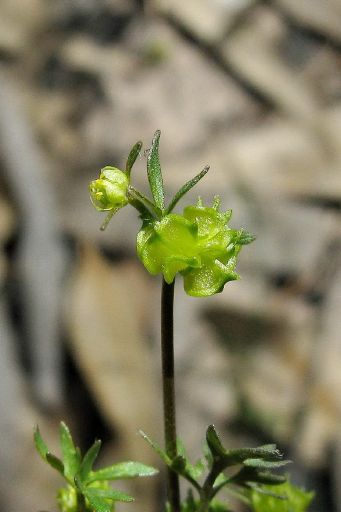