About 1600 species, virtually cosmopolitan but mainly in subtropical and warm-temperate regions; 30–40 species in Australia, at least 10 naturalized. The genus Chamaesyce is sometimes maintained for those species with mainly prostrate stems, opposite leaves with asymmetric bases and seeds without a caruncle.

The following species are included in the identification key may be encountered but are they not treated as established members of the Victorian flora.

Euphorbia characias subsp. wulfenii (Hoppe ex Koch) A.R. Sm. (Large Mediterranean Spurge) is an occasional garden-escape or persists in old garden sites, but it is not considered to be truly naturalized in Victoria. This robust Mediterranean perennial to 180 cm high has tufted, mostly unbranched stems that are bare in the lower part with prominent leaf scars. The leaves are glaucous, oblong, to c. 13 cm long and 1 cm wide, strongly dimorphic, those on the ultimate fertile branchlets being shorter than those below. The cyathia are dense, terminal and upper axillary and subtended by showy, yellowish-green, paired, suborbicular-deltate bracts.

The tropical Euphorbia hirta L. (Asthma Plant), which is native to northern Australia, has been collected from a lawn at Red Cliffs near Mildura but is probably not truly naturalized there or elsewhere in Victoria. This decumbent to erect annual herb has stems covered with a mixture of short curled appressed hairs and longer spreading yellow hairs. The cyathia are in dense head-like axillary or terminal cymes. The glands are ovate, reddish and usually have small pink or white appendages. 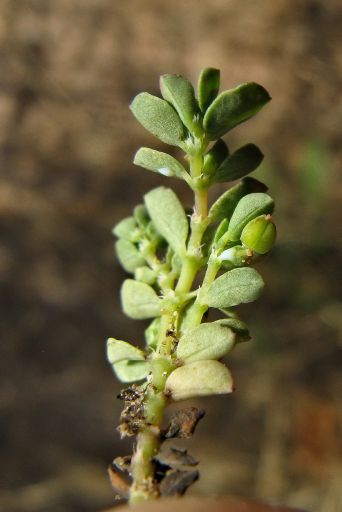