Aedo (2017) cites a single collection (Tilden 687) from the early 1900's of Geranium obtusisepalum (specimens held at F, G, K), collected from Point Lonsdale, Victoria, noting that this is a surprising locality given that the species typically occurs at elavations of 1340-1520 m in the ACT and NSW. It is possible that the associated label had been misplaced from another specimen, and given the uncertainty of the correct location, the species is excluded from the Victorian flora. G. obtusisepalum is closely related to G. retrorsum and G. solanderi. These three species share a distinctive, turnip-shaped rootstock. G. obtusisepalum is characterised by 1-flowered cymules, and sepals with a very short mucro.. Both G. retrorsum and G. solanderi have 2-flowered cymules, and a conspicuous sepal mucro. G. obtusisepalum differs from G. sp. 1 (which also has a turnip-shaped rootstock, and very short (or absent) sepal mucro) in that G. sp. 1 can have either 1 or 2-flowered cymules and the petals are longer 10–12 mm long in G. sp. 1 (4–6.2 mm long in G. obtusisepalum).

The native species of Geranium are under investigation and several currently unnamed members of the genus have been outlined. The apparently most distinctive of these are included here with informal epithets.

Geranium purpureum Vill. is sometimes grown as an ornamental, often in rockeries or 'cottage gardens'. It readily self-seeds and could be anticipated to spread beyond cultivation. It closely resembles G. robertianum but differs in its smaller stature, broader leaf-lobes and smaller flowers.

Key to the species of Geranium 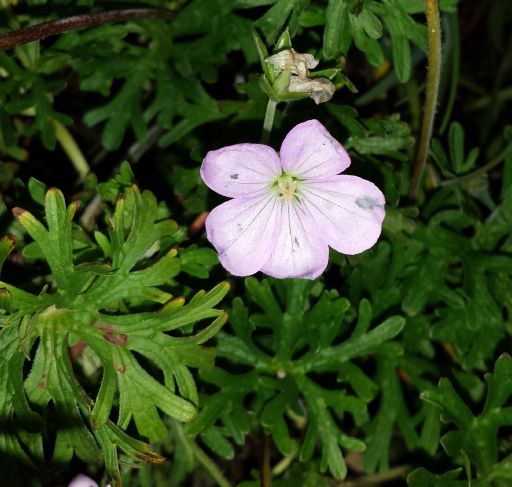