Annual or perennial herbs, tufted or rhizomatous, rarely tuber-bearing. Culms triquetrous to terete, nodeless. Leaves sometimes reduced to sheaths; ligule present or absent. Inflorescence simple or compound, umbel-like or head-like, rarely reduced to one spikelet; involucral bracts mostly leaf-like. Spikelets many- or few-flowered, flattened or terete, spicate or digitate at the ends of the ultimate branches or sometimes occupying the whole of the ultimate branches; rachilla straight or flexuous, often bordered by hyaline or coloured membranous wings; glumes distichous (very rarely spiral), concave or keeled, keel usually green, all except the lowest 2 or 1 subequal and containing bisexual flowers or the terminal one sometimes male; hypogynous bristles absent; stamens 1–3; style 2–3-fid, continuous with ovary, not thickened at base, deciduous. Nut trigonous or lenticular, glabrous, smooth or minutely punctate, rarely coarsely reticulate or transversely elongated.

Cyperus laevigatus L., widespread through the tropics and subtropics and variously regarded as native or naturalised in Australia, is known from Picanninie Blue Lake in the far south-east of South Australia, just a few kms west of the Victorian border and could be anticipated to be found in similarly lime-rich, slightly brackish swamps nearby in Victoria. It is distinguished from other Victorian species in having spikelets arising at the base of a single bract that appears to be a continuation of the culm (superficially resembling an e.g. Isolepis species). It is keyed here, but not treated further.

This treatment is based on a manuscript prepared by the late O. D. Evans for the former Flora of New South Wales series.

Notes: For compressed or flattened spikelets, width is measured across the flattened surface. 'Glume spacing' refers to the distance between the attachment point of two adjoining glumes on the same side of the rachilla. This is only given for species that are otherwise hard to distinguish. Dispersal of propagules can occur in several ways (Wilson 1991), the two most common ways being: (1) the individual glumes and nuts fall (together or separately), leaving the persistent rachilla; or (2) the whole spikelet falls as a unit. 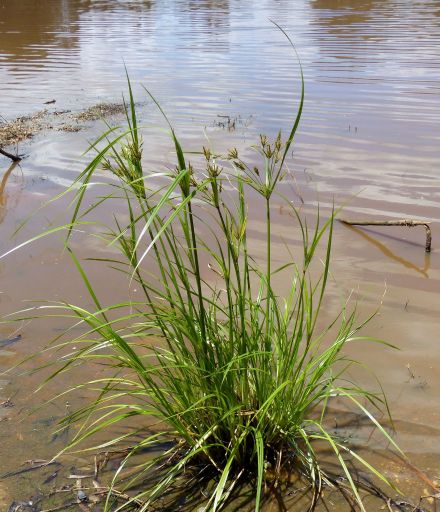