About 1500 species, virtually cosmopolitan but mainly in Central and South America, also Africa and Australia; 117 species in Australia, 94 native, 87 endemic.

In many cases the presence of ripe fruit is necessary for reliable identification of species.

The South American garden Potato, Solanum tuberosum L., sometimes persists by tubers on farmland, in vegetable gardens, around rubbish tips or other places where garden refuse has been dumped, but is not truly naturalized in Victoria or elsewhere in Australia. Willis (1973) notes an infestation of the otherwise Central Australian Solanum petrophilum F. Muell. (Rock Nightshade) near Charlton in north-west Victoria, but it does not appear to have persisted there. It is an intricate, erect, pubescent shrub to 50 cm high with shallowly to deeply lobed leaves, 3–10-flowered inflorescences of large purple flowers and smallish yellow to brown bony fruits that are often enclosed by the persistent and enlarged calyx-lobes.

Key to the species of Solanum 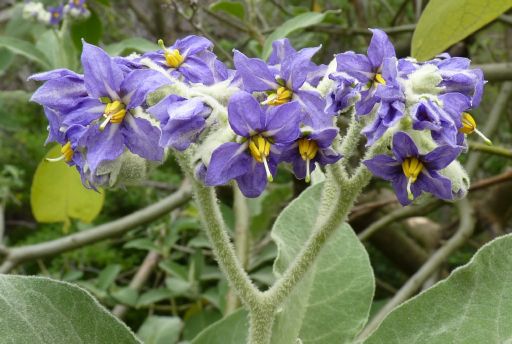