Trees or mallees; bark smooth or rough. Leaves of seedling and young plant (juvenile leaves) distinct from adult leaves; adult leaves petiolate, formed decussately, becoming separated by intranodes, ovate to lanceolate or falcate, dull or glossy; penninerved with lateral veins looped, intramarginal vein prominent; oil glands present in most species. Some species reproductively mature while crown is in the juvenile phase. Inflorescences axillary, usually in leaf-axils, but in some species flowers in leafless, terminal pseudo-panicles, or on leafless shoots in axils of leaves at ends of branchlets. Flower buds single, or in 3s, 7s, 11s, etc.; sepals and petals absent, replaced by one or two opercula; stamens numerous, staminodes present in some species; ovary sunk into hypanthium, with 3 to 6 chambers; ovules hemitropous or anatropous. Fruit dehiscing by valves; seeds ellipsoid, cuboid or pyramidal but variously flattened or distorted, with terminal or ventral hilum; numerous chaff grains usually included with seeds.

Some species of Eucalyptus, as currently understood, are highly variable and many are known to hybridise. Some hybrids have been formally named, but many others, probably equally as common, have not. Within hybrid zones, backcrosses often occur, leading to a confusing range of variation between the parent taxa. As well as hybrids, there are a number of notable regional forms that have been given provisional informal names. All named hybrids and the some of the more morphologically distinct regional forms are included in VicFlora. However, they are not included in the key to species or given a full diagnosis as their morphological boundaries are often poorly defined or taxonomically incompletely resolved.

We are indebted to Kevin Rule for the key to species and advice on many poorly known and informal taxa in this account.

Multi-access key to the Victorian eucalypts 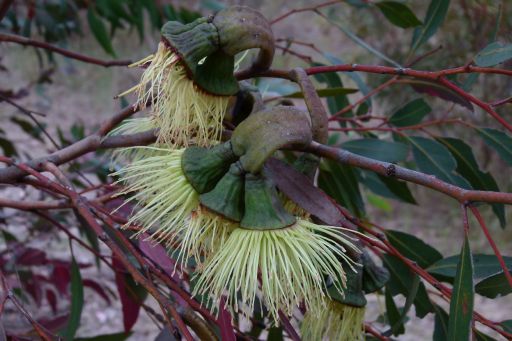